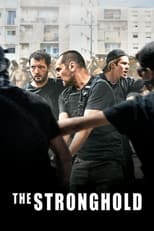 Director Cédric Jimenez CastGilles Lellouche, François Civil & Karim LeklouRelease Aug 18th, 2021 A police brigade working in the dangerous northern neighborhoods of Marseille, where the level of crime is higher than anywhere else in France.
The Stronghold is directed by Cédric Jimenez and was released on Aug 18th, 2021.

Where can you stream The Stronghold: Not yet streaming online DVD/Bluray via Amazon