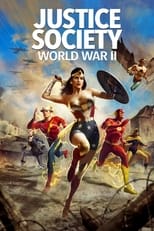 Director Jeff Wamester CastStana Katic, Matt Bomer & Chris DiamantopoulosRelease Apr 27th, 2021 While speeding off to help in an impromptu battle, The Flash blazes and rips through time, only to find himself dropped into the middle of World War II. It’s here that The Flash meets Wonder Woman and her top secret team, known as the Justice Society of America. Amidst the raging tides of war, gripping combat and the velocity of valor, The Flash must fight to return to his own timeline.
Justice Society: World War II is directed by Jeff Wamester and was released on Apr 27th, 2021.

Where can you stream Justice Society: World War II:

Stay up to date with the streaming options of Justice Society: World War II & other streaming releases