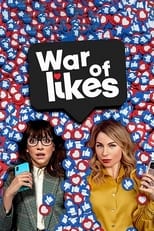 Director Maria Ripoll CastRegina Blandón, Ludwika Paleta & José SefamiRelease Mar 12th, 2021 In order to advance her career in the dynamic world of publicity in Mexico City, Raquel tries to reunite with her high school friend Cecy who has become the queen of social media. But unlike followers, friendships do not come instantly.
War Of Likes is directed by Maria Ripoll and was released on Mar 12th, 2021.

Where can you stream War Of Likes: '