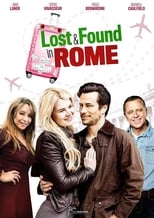 Director Todor Chapkanov CastSophie Vavasseur, Paolo Bernardini & Maxwell CaulfieldRelease Feb 4th, 2021 Emma is a spoiled rich girl who lives with her father in his luxurious villa in California. She meets a handsome Italian tennis player, Nick, at a charity event. He is off to Europe for a big tennis competition, so Emma decides to follow him overseas without telling anyone. She packs cash in her luggage, but finds out upon arrival in Europe that her luggage is lost. She goes to the "Lost and...
Lost & Found in Rome is directed by Todor Chapkanov and was released on Feb 4th, 2021.

Where can you stream Lost & Found in Rome: Not yet streaming online