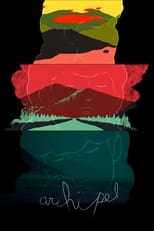 Director Félix Dufour-Laperrière Cast, & Release Sep 18th, 2021 A true animated film about invented islands. About an imaginary, linguistic, political territory. About a real or dreamed country, or something in between. Archipelago is a film of drawings and speeches, that tells and dreams a place and its inhabitants, to tell and dream a little of our world and times.
Archipelago is directed by Félix Dufour-Laperrière and was released on Sep 18th, 2021.

Where can you stream Archipelago: Not yet streaming online