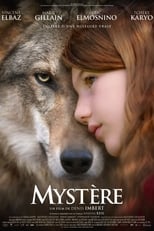 Director Denis Imbert CastVincent Elbaz, Shanna Keil & Marie GillainRelease Dec 15th, 2021 Stéphane decides to move to the beautiful mountains of Cantal in order to reconnect with his 8-year-old daughter, Victoria, who has been silent since her mother's disappearance. During a walk in the forest, a shepherd gives Victoria a puppy named "Mystery" who will gradually give her a taste for life. But very quickly, Stéphane discovers that the animal is in reality a wolf… Despite the...
Mystère is directed by Denis Imbert and was released on Dec 15th, 2021.

Where can you stream Mystère: Not yet streaming online