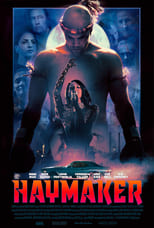 Director Nick Sasso CastZoë Bell, Veronica Falcón & Udo KierRelease Jan 29th, 2021 Haymaker follows a retired Muay Thai fighter working as a bouncer, who rescues an alluring transgender performer from a nefarious thug, eventually becoming her bodyguard, protector, and confidant. The relationship leads Sasso's character to make an unexpected return to fighting, risking not only his relationship, but his life. Its a story about human dignity and love.
Haymaker is directed by Nick Sasso and was released on Jan 29th, 2021.

Where can you stream Haymaker: