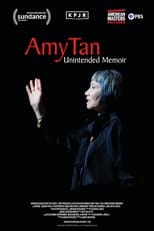 Director James Redford Cast, & Release May 3rd, 2021 Amy Tan has established herself as one of America’s most respected literary voices. Born to Chinese immigrant parents, it would be decades before the author of The Joy Luck Club would fully understand the inherited trauma rooted in the legacies of women who survived the Chinese tradition of concubinage.
Amy Tan: Unintended Memoir is directed by James Redford and was released on May 3rd, 2021.

Where can you stream Amy Tan: Unintended Memoir:

Stay up to date with the streaming options of Amy Tan: Unintended Memoir & other streaming releases