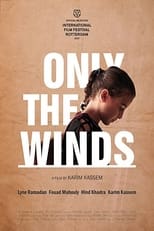 Director Karim Kassem Cast, & Release Apr 1st, 2020 A Lebanese filmmaker (Karim) travels from New York to Beirut to conduct research for a film that he wants to make about blind children in the mountains of Lebanon. He arrives to Beirut with a condition that had been affecting his eyes and causes him to go straight into surgery, temporarily blinding him with patches covering his eyes. He uses the healing time to reflect, write and spend time with...
ONLY THE WINDS is directed by Karim Kassem and was released on Apr 1st, 2020.

Where can you stream ONLY THE WINDS: Not yet streaming online

Director Karim Kassem's Documentary & Drama movie ONLY THE WINDS is produced by Changing Film Productions & was released 2020-04-01.
Costs: $0 Box Office Results: $0 Length/Runtime: 133 min ONLY THE WINDS Official page
Blossoming Red
Between One Shore And Several Others