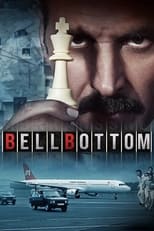 Director Ranjit Tewari CastAkshay Kumar, Vaani Kapoor & Huma QureshiRelease Aug 19th, 2021 By the early ‘80s, India had already witnessed multiple airplane hijacks. In 1984, the country was made to face another such challenge. BellBottom, a RAW Agent, sees through the plan and thus begins India's first overseas covert operation. An operation, lead by a forgotten hero, that went on to create one of the most defining moments for India.
Bell Bottom is directed by Ranjit Tewari and was released on Aug 19th, 2021.

Where can you stream Bell Bottom: Not yet streaming online