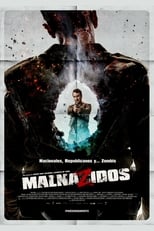 Director Alberto de Toro, Javier Ruiz Caldera CastAura Garrido, Miki Esparbé & Luis CallejoRelease Mar 11th, 2022 Months after bloody combats leave behind thousands of dead in the trenches. Jan Lozano, Captain of the Fifth Brigade has fallen prisoner by an opponent's platoon along with a young driver while carrying out a mission that has been entrusted to him. The possibility of dying executed will soon be overtaken when a new unknown enemy arises. Both rival sides must unite and set their mutual hate aside...
Malzanidos is directed by Alberto de Toro, Javier Ruiz Caldera and was released on Mar 11th, 2022.

Where can you stream Malzanidos: Not yet streaming online