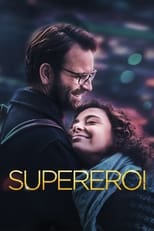 Director Paolo Genovese CastJasmine Trinca, Alessandro Borghi & Greta ScaranoRelease Dec 23rd, 2021 The story of a loving couple who struggles to keep its relationship alive against the inescapable passing of time, told in a nonlinear way over the course of ten years in their lives.
Superheroes is directed by Paolo Genovese and was released on Dec 23rd, 2021.

Where can you stream Superheroes: Not yet streaming online