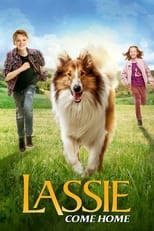 Director Hanno Olderdissen CastSebastian Bezzel, Anna Maria Mühe & Bella BadingRelease Feb 20th, 2020 12-year-old Florian and his beloved dog Lassie live in an idyllic village in the German countryside. When Florian's father loses his job, the family have to move into a small apartment where there are no dogs allowed. Lassie is given away to another family, but Florian and Lassie yearn to be reunited again so Florian sets out on an adventure to find his best friend.
Lassie Come Home is directed by Hanno Olderdissen and was released on Feb 20th, 2020.

Where can you stream Lassie Come Home: Not yet streaming online