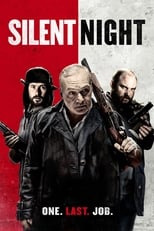 Director Will Thorne CastBradley Taylor, Cary Crankson & Frank HarperRelease Jun 26th, 2021 Mark, a low end South London hitman recently released from prison, tries to go straight for his daughter, but gets drawn back in by Alan, his former cellmate, to do one final job.
Silent Night is directed by Will Thorne and was released on Jun 26th, 2021.

Where can you stream Silent Night: