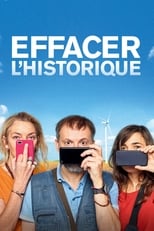 Director Benoît Delépine, Gustave Kervern CastBlanche Gardin, Denis Podalydès & Corinne MasieroRelease Aug 26th, 2020 In a provincial suburb, three neighbours come to terms with the consequences of the new world of social media. Marie, who lives off her husband’s family allowance, is afraid of losing her son’s respect because of a sex tape. Bertrand can’t say no to advertising calls and is fighting to protect his daughter, who is being bullied online. Christine, after losing everything because of her...
Effacer l’historique is directed by Benoît Delépine, Gustave Kervern and was released on Aug 26th, 2020.

Where can you stream Effacer l’historique: Not yet streaming online