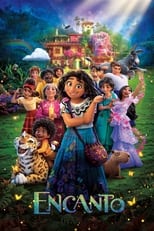 Director Jared Bush, Charise Castro Smith, Byron Howard Cast, & Release Nov 24th, 2021 The tale of an extraordinary family, the Madrigals, who live hidden in the mountains of Colombia, in a magical house, in a vibrant town, in a wondrous, charmed place called an Encanto. The magic of the Encanto has blessed every child in the family with a unique gift from super strength to the power to heal—every child except one, Mirabel. But when she discovers that the magic surrounding the...
Encanto is directed by Jared Bush, Charise Castro Smith, Byron Howard and was released on Nov 24th, 2021.

Where can you stream Encanto: