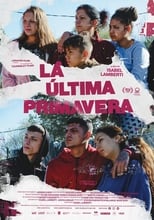 Director Isabel Lamberti CastMaría Duro Rego, David Gabarre Duro, David Gabarre Jiménez, Alejandro Gabarre MendozaRelease Oct 29th, 2020 The Spanish family Gabarre-Mendoza is celebrating a birthday, when it is interrupted by a police inspection. In ‘La Cañada Real’, a shanty town just outside Madrid, the inhabitants are forced to leave their illegal homes. Each member of the family struggles in their own way with their unstable position.
La última primavera is directed by Isabel Lamberti and was released on Oct 29th, 2020.

Where can you stream La última primavera: Not yet streaming online