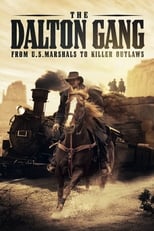 Director Christopher Forbes CastWilliam Adams, Jezibell Anat & Gunner BridgerRelease Jul 28th, 2020 When their brother Frank is killed by an outlaw, brothers Bob Dalton, Emmett Dalton and Gray Dalton join their local sheriff's department. When they are cheated by the law, they turn to crime, robbing trains and anything else they can steal from over the course of two years in the early 1890's. Trying to out do Jesse James, they attempt to rob two banks at once in October of 1892, and things get...
The Dalton Gang is directed by Christopher Forbes and was released on Jul 28th, 2020.

Where can you stream The Dalton Gang: