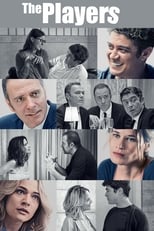 Director Stefano Mordini CastRiccardo Scamarcio, Valerio Mastandrea & Laura ChiattiRelease TBA From campy lies to sexy surprises, this collection of vignettes captures the follies of several men as they fumble with fidelity and relationships.
The Players is directed by Stefano Mordini and was released on TBA.

Where can you stream The Players: Not yet streaming online