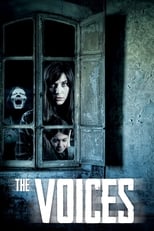 Director Wesley Alley(co-director), Bradley Fowler(co-director) CastAmanda Markowitz, Victoria Matlock & Brendan Sexton IIIRelease May 12th, 2020 Angry and upset after a sudden breakup with her fiancé, Grace Crawford seeks sanctuary at the remote home of her sister, Catherine. It becomes clear that Catherine is suffering from paranoid schizophrenia, much like their late mother, who had taken her own life. While coming to terms with this heavy realization, Grace also uncovers another terrible little secret that has her struggling to...
The Voices is directed by Wesley Alley(co-director), Bradley Fowler(co-director) and was released on May 12th, 2020.

Where can you stream The Voices: