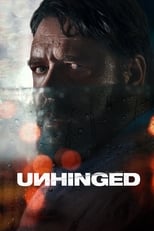 Director Derrick Borte CastRussell Crowe, Gabriel Bateman & Caren PistoriusRelease Aug 21st, 2020 A divorced mother honks impatiently at a deranged middle-aged stranger at a red light while running late on her way to work. His road rage escalates to horrifyingly psychotic proportions as he becomes single-mindedly determined to teach her a deadly lesson for provoking him.
Unhinged is directed by Derrick Borte and was released on Aug 21st, 2020.

Where can you stream Unhinged: