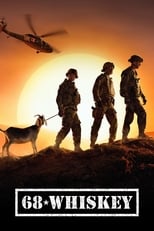 CreatorRoberto BenabibCastSam Keeley, Gage Golightly & Cristina RodloNetwork Paramount Network Air Date Jan 15th, 2020 A dark comedy following a multicultural mix of men and women deployed as Army medics to a forward operating base in Afghanistan nicknamed “The Orphanage.” Together, they endure a dangerous and Kafkaesque world that leads to self-destructive appetites, outrageous behavior, intense camaraderie and occasionally, a profound sense of purpose.

Where can you stream 68 Whiskey?

On 2020-01-15 Drama/Comedy TV Series 68 Whiskey first aired on Paramount Network. Written and created by Roberto Benabib, and produced by Imagine Television & CBS Television Studios, 68 Whiskey will return and was last broadcasted on 2020-03-18.
IMDb Rating: /10 68 Whiskey Official page on Paramount NetworkAll Seasons: 1 All Episodes: 10 Average Episode length: 45 minutes Seasons Season 1 - 2020-01-15 with 10 Episodes
Stargirl
Agent Hamilton
We use cookies to ensure that we give you the best experience on our website. If you continue to use this site we will assume that you are happy with it.Ok