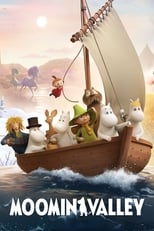 CreatorN/ACastMatt Berry, Warwick Davis, Taron Egerton, Edvin EndreNetwork YLE Air Date Dec 31st, 2019 Follow the life and adventures of curious, kind and idealistic Moomintroll. A typical hero in a coming-of-age story, Moomintroll tries to tackle the puzzle of growing up to his true, individualistic self while remaining a beloved part of the family.

Where can you stream Moominvalley? DVD/Bluray via Amazon