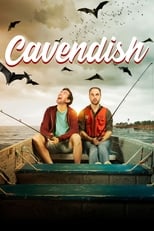 CreatorAndrew BushCastMark Little, Andrew Bush, Kelli Ogmundson, Kevin EldonNetwork CBC Television Air Date Jan 8th, 2019 Mark and Andy return to Cavendish for the first time since childhood to care for their ailing father who runs The Museum of the Strange and Fantastic. They quickly find out that Cavendish is not like other towns, and while the brothers become embroiled in creepy misadventures, they soon realize their family dynamic hasn’t changed much since they were kids.

Where can you stream Cavendish? DVD/Bluray via Amazon

On 2019-01-08 Comedy TV Series Cavendish first aired on CBC Television. Written and created by Andrew Bush & Mark Little, and produced by Temple Street Productions, Cavendish will return and was last broadcasted on 2019-02-26.
IMDb Rating: 7.1/10 Cavendish Official page on CBC TelevisionAll Seasons: 1 All Episodes: 8 Average Episode length: 30 minutes Seasons Season 1 - 2019-01-08 with 8 Episodes
Coroner
The Masked Singer
We use cookies to ensure that we give you the best experience on our website. If you continue to use this site we will assume that you are happy with it.Ok