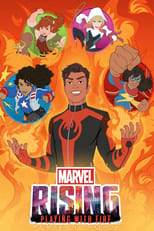 Director Sol Choi, Eric Radomski CastTyler Posey, Navia Robinson & Cierra RamirezRelease Dec 18th, 2019 Synopsis From directors Sol Choi and Eric Radomski and writer Danielle Wolff come the 5th installment in the Marvel Rising animation series. Featuring The voices of Dove Cameron, Kathleen Khavari, Tyler Posey, Cierra Ramirez, and Milana Vayntrub, the action sci-fi animation was released on December 18, 2019 in the US through the Marvel HQ YouTube channel. The single sung by Navia Robinson, who was also the voice actor for Zayla, Roaring Thunder, came out on December 19, a day after the TV movie release.
Marvel Rising: Playing with Fire is directed by Sol Choi, Eric Radomski and was released on Dec 18th, 2019.

Where can you stream Marvel Rising: Playing with Fire:

Netflix
Stay up to date with the streaming options of Marvel Rising: Playing with Fire & other streaming releases