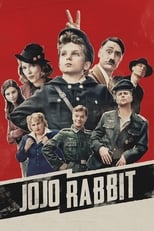 Director Taika Waititi CastRoman Griffin Davis, Thomasin McKenzie & Taika WaititiRelease Nov 8th, 2019 Synopsis Roman Griffith David topbills the American comedy-drama Jojo Rabbit, under the direction of Taika Waititi. Waititi writes, co-produces, and stars in the film as well. Davis leads the cast that includes Scarlett Johansson, Thomasin Mackenzie, Rebel Wilson, Stephen Merchant, Alfie Allen, Sam Rockwell, and Waititi. It won the Grolsch People’s Choice Award from the Toronto International Film Festival, and received nominations from the Golden Globe Awards for Best Motion Picture and Best Actor (musical or comedy) for Davis. It was produced for USD 14 million and was able to rake in USD 25.4 million in theaters after its October 2019 US release. Jojo Rabbit is directed by Taika Waititi and was released on Nov 8th, 2019.

Where can you stream Jojo Rabbit: