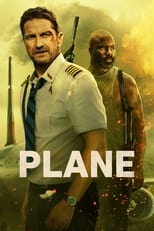 Director Jean-François Richet CastGerard Butler, Mike Colter & Yoson AnRelease Jan 13th, 2023 After a heroic job of successfully landing his storm-damaged aircraft in a war zone, a fearless pilot finds himself between the agendas of multiple militias planning to take the plane and its passengers hostage.
Plane is directed by Jean-François Richet and was released on Jan 13th, 2023.

Where can you stream Plane: Not yet streaming online