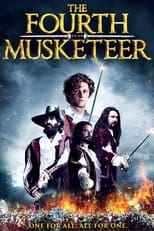 Director Steve Lawson CastJonathan Hansler, Matt Ingram-Jones & Morgan Rees-DaviesRelease Mar 7th, 2022 At the behest of his father, young d'Artagnan travels from rural Gascony to Paris, where he becomes embroiled in a devious plot between the King's Musketeers and the Guardsmen of Cardinal Richelieu.
The Fourth Musketeer is directed by Steve Lawson and was released on Mar 7th, 2022.

Where can you stream The Fourth Musketeer: Not yet streaming online